The internet sensation cute little Ahmed Shah with the Harry Potter’s glasses has been causing a stir on social media after his viral videos, people also love him across the border in India as well.

Ahmad has appeared in many shows like Jeeto Pakistan with Fahad Mustafa and Ramazan transmission of Waseem Badami on ARY Digital and in Nida Yasir’s morning show Good Morning Pakistan.

His performance takes people’s hearts especially after his viral video in which he says “Pichay Toh Dekho”.

Indian’s comedy queen, Bharti Singh is famous for her hilarious comedy in the Kapil Sharma Show, she also went crazy over Ahmed Shah and even made a Tiktok video on it. Cricketer Virat Kohli also tried to mimic Ahmed Shah.

Recently, it was Ahmed Shah’s birthday and Indian singer Honey Singh wished the little kido on his Facebook story as “Happy Birthday to my favorite kid”. 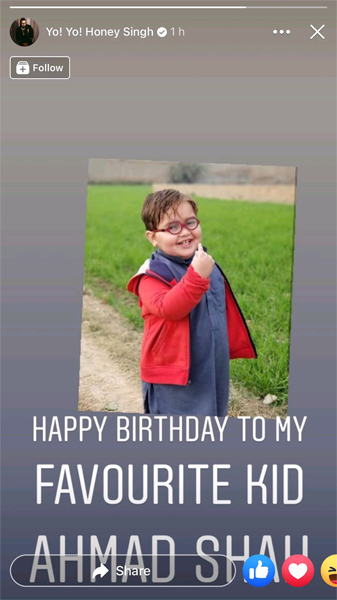 Ahmad’s cuteness made him a celebrity within no time! He is one of the most popular kids in Pakistan and all over the world.

We wish Ahmad Shah a very happy and joyful birthday.