A Pakistani Canadian journalist Tarek Fatah, who is known for misrepresenting Pakistan and hatred for the people of our country. He has always shared fake news and trolls on his social media.

Just a day before the iconic Indo-Pak cricket match Fateh posted a fake news on his Twitter saying “Pakistan captain Sarfaraz Ahmed has brought out “their 13th Man, a Mullah to bless the pitch for tomorrow’s match against India“.

Many people commented and slammed Fatah for this misleading post he shared because it was not a “13th Man, a Mullah” who has in the picture, but was the former Pakistan batsman Inzamam-ul-Haq.

This time again he took his social media Twitter account to misrepresent a scene from the movie Load Shedding claiming that “Pakistani mother slams the door shut in the face of Polio workers screams at the two female volunteers. I will never ever allow my children to take these drops.” 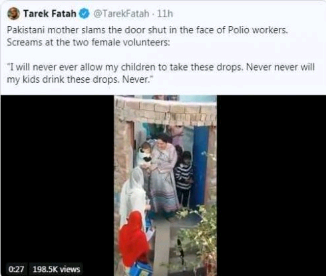 Poor Fateh wasn’t aware that the polio worker in that scene was Mehwish Hayat. As we all know Mehwish Hayat is an expert in facing situations like this, she snapped back at Tarek and responded to his post saying “this is a scene from my movie Load Wedding with me playing the polio worker and that woman being an actress. Through the film, we were raising awareness of the issue and I’m glad to see our performances were so convincing.” 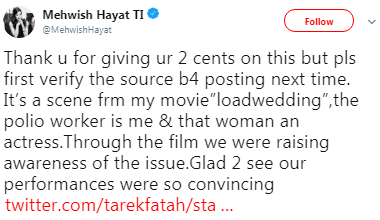 She further added “Thank you for giving your two cents on the matter but please verify the source before posting next time.”

We love how Mehwish slammed the journalist for his hideous and fake post, later he deleted his Tweet. We are sure in future Tarek will think ten times before posting anything fake on his social media because if he does then that will only cause more trouble for himself.