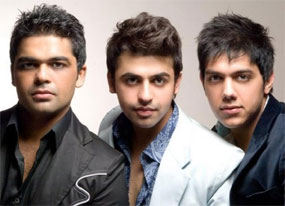 The upcoming season of one of most viewed Pakistani musical show ‘Coke Studio’ will be featuring Pakistan’s Most Wanted & International award winning band Jal,

Coke Studio not only combines vocals from east and west but it weaves together notes, scales, tempo, beat and instruments.

Previously the show has featured the great musicians of Pakistan’s Cultural and Pop music.

Nusrat Fateh Ali Khan’s famous Qawali Piya Re Piya Re sung by Atif Aslam is an example of this fusion.

Jal will be performing in the fourth season of Coke Studio,
Recently the band visited Karachi for finalizing the things,
Songs to be sung are not yet decided,
Rehearsals will start soon in the Studio.

Dialogue Promo (The New Half Robin Hood Is Here)

Dialogue Promo (The Con Man Does It Again)

Watch 8th Episode of Living on the Edge Season 2 on ApniISP only!

Watch 7th Episode of Living on the Edge Season 2 on ApniISP only!

The Chat is over now.

Watch 6th Episode of Living on the Edge Season 2 on ApniISP only!