It’s 2018 and we, as a nation, have still not realized that people’s personal choices do not need our opinions. Well the extravagant wedding of Aiman Khan and Muneeb Butt has been receiving a lot of criticism. The wedding started off with a Dholki, then came along Bridal Shower, slumber party for Aiman and her girls, Nikah, Muneeb’s Mayun, a Lollywood themed wedding party, Aiman’s Mayun and a Mehndi for both of them last night. After which, the Pakistanis have lost their calm and screaming “Bas kar do!”

People on social media are criticizing the long wedding events list. Some said that it’ll be 2050 and the wedding will still go on, while others thought that they are setting unreal examples of wedding for their followers. Then came along a tweet from the Canadian-Pakistani comedian, Zaid Ali T, which kind of pointed towards the same thing. It said that the weddings these days have become like a test match and don’t seem to end. 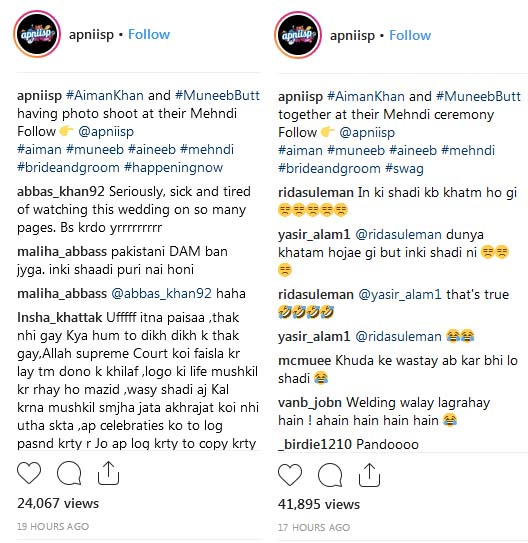 There was also a post that exaggerated the whole thing and said that it would have been better if the couple had made charity with all the money that they are spending on the wedding. To which, Muneeb Butt responded that it was none of other people’s business to worry about how much they give away and it was completely the couple’s choice on how to bring the wedding on. And that is totally right. 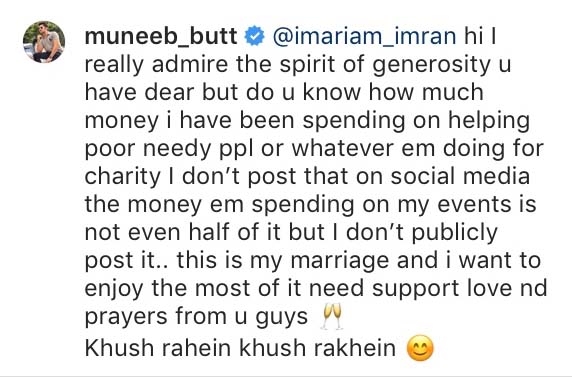 Why can’t we just let people be happy or even better, just LET THEM BE? It’s high time, we as a nation, discuss better things than other people’s lives and choices. Our team wish Aiman and Muneeb the best of everything.