This newly wed couple is not coming slow! Yasir and Iqra are giving us some major relationship goals, they have won millions of hearts from Yasir’s proposal at the Lux Style Awards, to their marriage in December 2019. They have been causing a storm on social media since.

The couple set off on their honeymoon right after getting married, to some really breathtaking and exotic places. The love birds have been posting quite a lot of pictures together on social media with some really adorable filmy caption.

Though the couple is basking love from their fans in the comments but most of them are also criticizing their relationship and making fun of them by saying since they are married now, Iqra is Yasir’s “respect” and she should not be on social media any longer. Which made Yasir react in a furious way.

Yasir replied saying that he needs to mind his own business and shouldn’t be poking their nose in other people’s lives. The fans also supported Yasir. 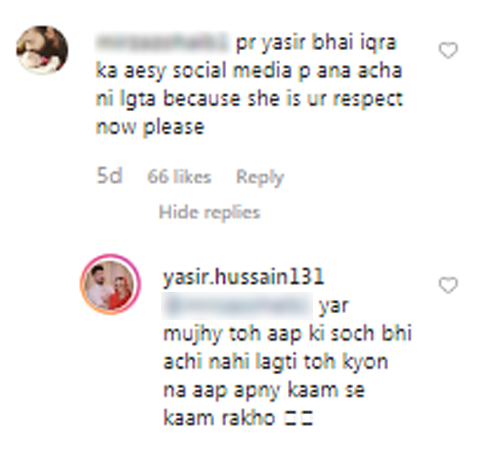 It’s unbelievable to see how the two newly wed couple back each other up despite of negative comments from people.